Deaths referred to the Coroner

Where the cause of death is unexplained, sudden, due to an accident or violent or if the deceased was not seen by the certifying doctor either after death or within 14 days before the death, the death will be reported to HM Coroner.

This investigation may take time, for instance if there is to be an inquest, so you should liaise closely with the coroner’s office. But don’t let that stop you from contacting the funeral director as soon as possible, as preliminary arrangements can still be made whilst waiting for the coroner to release the body.

IF CAUSE OF DEATH CLEAR

In this scenario, the family will collect the Medical Certificate of the Cause of Death (MCCD) from the doctor or hospital and proceed with registering the death with the Registrar of Births, Deaths and Marriages. The Coroner’s Office will usually send a supporting document called an ‘A’ form directly to the Register Office to confirm that no further investigations are required.

If there is to be a cremation, the family or funeral director will need to obtain Cremation Forms 4 and 5 from the doctor or hospital (at a cost of £164). The registrar will then issue the Certificate for Burial or Cremation (also known as the Green Form).

IF CAUSE OF DEATH UNCLEAR

The coroner will decide to investigate the case further, initially by way of a post-mortem examination. If this shows that the death was due to natural causes, the Coroner will release the body once no further examinations are needed and issue the paperwork for the funeral.

The family will not collect a Medical Certificate of the Cause of Death (MCCD) from the doctor or hospital – instead, the coroner will provide details of where and when to register the death. If the body is released with no inquest, the coroner will send a form (a Pink Form called a Form 100B) to the registrar.

The Registrar will then provide the Certificate for Burial or Cremation (Green Form).

If the post-mortem examination proves inconclusive, the coroner will open an inquest to establish the cause of death. The coroner will often send an interim death certificate (Coroner’s Certificate of the Fact of Death) to the family and release the body before the inquest is completed so that the funeral can go ahead.

The family will not go to register the death, as the registrar cannot issue a death certificate until the investigation has been completed, so there is no Certificate for Burial or Cremation (Green Form) issued in this case.

Visual guide to the process: 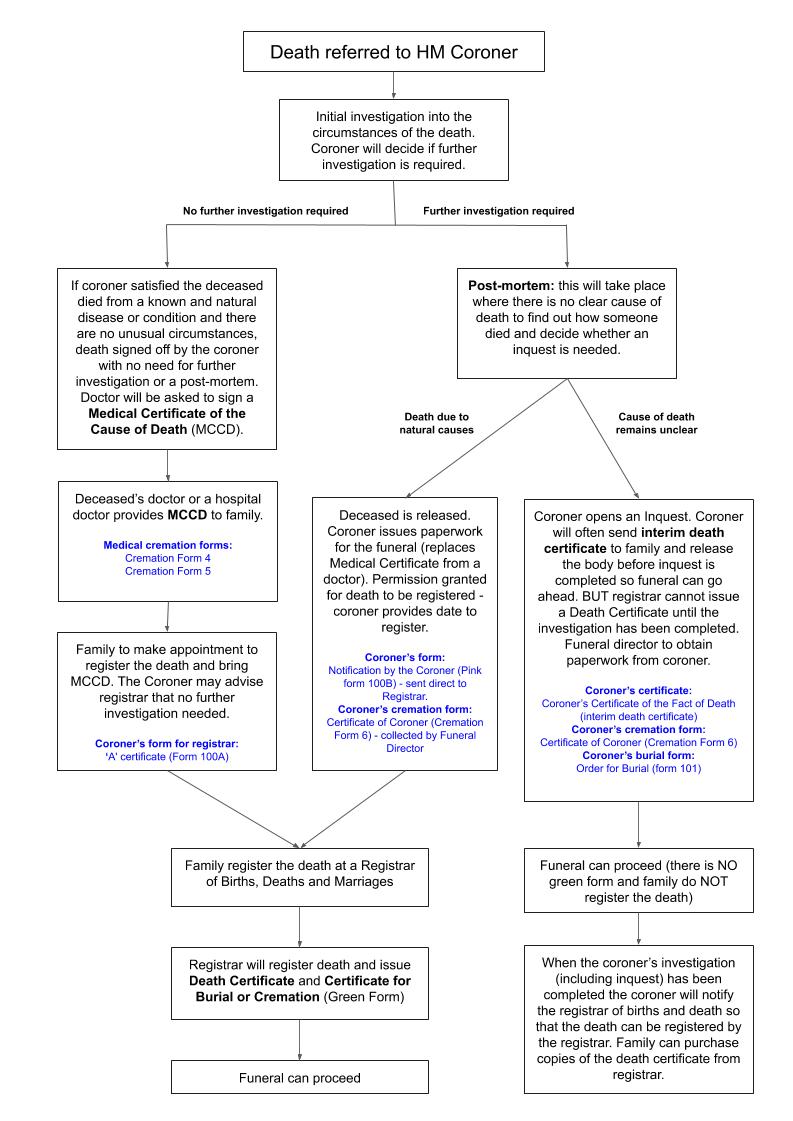 At White Rose Modern Funerals we help guide families through the process for when a death has been referred to HM Coroner. We will liaise directly with the Coroner’s Office and work to ensure that the funeral can go ahead with the minimum delay possible. For more information about arranging a funeral involving a referral to the coroner please call us on 020 3281 1045.